Showing posts from September, 2015
Show all

The "Trials" of Poison Study

Part 2!  In Part 1, I talked about how I sparked on the idea for Poison Study .  You can read it here:  Part 1  Today's post is what happened next.  After spending 4 years writing and revising Poison Study , it was ready. I decided I wanted to find a literary agent to help me sell my book to publishers (editors work for publishers).  So I bought a copy of The Literary Marketplace to do my research and find agents who didn't charge fees to read my book, who were located in New York City, and who represented fantasy novels. I made a list of those agents and agencies. In June 2001, I began submitting to agents.  Most of them wanted to see the first 3 chapters and the synopsis, and some only wanted a query letter.  A query letter is just a single page that tells the agent what your book is about and who you are. My first round of submissions goes out and I start getting rejections. Most are form letters (or postcards) and a few just write, "Will have to pass on this p
12 comments
Read more

T he read-along will take place from October 1st-31st and we will be reading a few chapters a week - see the schedule below. This is a great opportunity for those of us that are hardcore fans of the series to re-read the book and for those of you that have been wanting to read the book to finally do it! We have some amazing bloggers helping host the read-along. You can participate and follow along on any of their blogs! Two Chicks on Books  http://www.twochicksonbooks.com/2015/09/join-us-for-poison-studys-by-maria-v.html Fiktshun  http://www.fiktshun.com/fiktshun/  Parajunkee  http://www.parajunkee.com/ Mundie Moms  http://mundiemoms.blogspot.com/ Read Now Sleep Later  http://www.readnowsleeplater.org/ What would be required of you? 1. Just sign up in the Linky over at Two Chicks on Books' blog and let us know you’re participating! (During the read-along you will be able to add your blog posts to a Rafflecopter for a chance to win one of the awesome giveaway prizes!
21 comments
Read more

The "Birth" of Poison Study 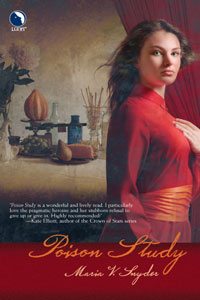 As many of you know this October will be 10 years since POISON STUDY was first published by LUNA books, an imprint of Harlequin.  While I'm having all kinds of fun things like a blog tour, scavenger hunt, chapters notes, read along, and prizes to celebrate during the month of October, I also thought I'd do a series of blog posts about the book and how it came to be :). I sparked on the idea of writing about a food/poison taster when I was reading Orson Scott Card's book, How to Write Science Fiction and Fantasy .  It was the chapter on characters and a scene jumped into my mind of a King who had fallen in love with his food taster and she was just about to taste his meal and it was probably poisoned, BUT she had to do it.  So he watches her in heartbreaking horror... I never did write that scene!  But it started me asking questions.  Who was this food taster?  Why was she there?  Why was the King worried about being poisoned?  I decided the King would be a practical t
15 comments
Read more 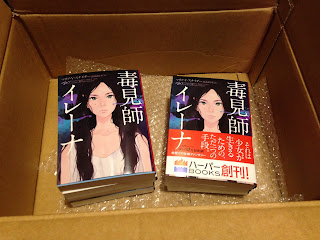 Yes another give away!  I received a couple of extra copies of the Japanese edition of POISON STUDY, which I think is very cool and is a "must have" for all you hard-core MVS readers :). POISON STUDY is doing very well in Japan with loads of great reviews.  It's number 1 in the Fantasy novel category on Rakuten Books!! (According to Yukari, who translated the book into Japanese is bigger and more popular than Amazon.  One Japanese reader said, "How many years has it been since I’ve acted like this? I couldn’t stop thinking about the story..."  And another said, " I read this book while in the bullet train from Tokyo the other day… I almost missed my station. Wow, that was close. High readability from the beginning, and you won’t be able to stop turning the pages in the latter half..." The give away is open to ALL!! a Rafflecopter giveaway I'm also still trying to reach 10,000 likes on my Facebook Author page for POISON STUDY's
20 comments
Read more 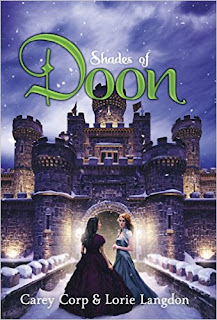 The new Doon book is out today!  SHADES OF DOON by Carey Corp and Lorie Langdon is the third in the Doon series, which will have four total. I really love this series.  The main characters, Veronica and MacKenna are likable and proactive and intelligent.  I will admit I'm partial to MacKenna as I love how she references Broadway Musicals and exclaims, "Son of a Sondheim!" She's more snarky and light hearted than Veronica, but that's a good thing as they balance each other out.  If you haven't read any of these book, the first on is DOON and the second is DESTINED FOR DOON.  For me to stick with a series this long - it has to be good ;) I interviewed Carey and Lorie on my blog last year.  Here's the link if you're interested:  Interview! Speaking of series....any recommendations?  What's your current favorite??
4 comments
Read more
More posts