Selling Ur Soul - Interview and Giveaway!

October 02, 2013
Would you sell your soul to the devil for a mega-hit bestselling book?  Randall the main character in Barry Lyga's latest book, UNSOUL'D does and what follows is a hilarious and sad look of the life of a somewhat successful author's journey to super stardom minus his soul.

Now for the disclaimer :)  Barry and I are friends who go way back to a time before we were both published authors.  We met at a writing workshop at World Con in Philadelphia in the 90s.  Keeping in touch via email and kvetching over our efforts to get published, we sold our first novels around the same time. His debut novel, The Astonishing Adventures of Fan Boy and Goth Girl is a fantastic story and a great insight into a 15 year-old boy's life.

UNSOUL'D is Barry's first book with an adult protagonist.  A warning to my younger readers that this book has lots of sex and adult language and situations.   It's also his first self-published book and only available as an ebook.

Barry has generously offered to give away 9 copies of his ebook!!  So leave a comment by Saturday, October 5, 2013 and you'll be entered to win a copy!  Please leave an email addy so I can contact you (Goodreads friends - no need to leave an addy - I can contact you through the site).  Open to ALL! 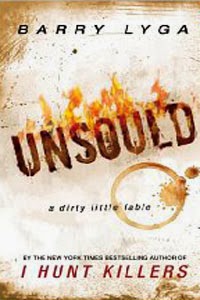 Then, one quiet morning, he meets the devil while pounding away at his laptop at his usual coffee shop. Soon, a deal is made, a contract is signed, and Randall is on his way to fame and fortune unlike any he ever imagined.

What follows is a bawdy, hilarious, yet harrowing tale of one man, one devil, and a deal that could change the world

Maria: You've been writing books for young adults for years why the switch to adult?

Barry: I never really thought of it as a "switch," to be honest with you. My YA was never "aimed" at any particular audience, and I've always had a fairly large, vocal adult readership. I don't think in terms of genres or market segments -- I think in terms of stories. So when this story occurred to me, it was just a moment of, "Oh, sure, probably not for kids" and then I went ahead and wrote it. The story wanted to be told, so I told it.

Maria: You also self-published this book. What prompted you to go solo?

Barry: There were a variety of factors that all came together. First of all, it's a tough book for publishers to wrap their minds around -- is it comedy? Satire? Literary? What the hell IS it? Sarah Maclean described it as "Nick Hornby writing Californication" and that's cool, but publishers don't grok that. So, I had an uphill battle ahead in terms of convincing someone to take a chance on it.

Then there was the fact that I come from the comic book world originally, where self-publishing has long been a thriving, important part of the market. I've always been fascinated by the details and minutiae of publishing, so I knew someday I would self-publish something. This was just the perfect opportunity to do so.

Maria: What sparked the idea for the story?

Barry: Years and years ago, I decided I wanted to write a "deal with the devil" story that had a really wicked twist at the end, something that turned such stories on their heads. But I didn't know what form it would take. And then one day a year or so ago, that beginning popped into my head: "That day, I had a bagel for breakfast and sold my soul to the devil. In retrospect, the bagel was probably a mistake." And Randall's whole voice and sad, sad life popped into my head.

Maria: The main character is a published author who sells his soul for a hit book. How much of Randall is Barry?

Barry: Ha! I like to tell people that Randall does and says everything I wish I'd done and said at some point in my life…but now am SO glad I never did! [LOL!]

Maria: I found Randall's character at times hard to like, yet I had to see how his story ended. You didn't sugar coat him at all and I loved the raw honesty. Were you concerned about your readers being unable to connect with him?

Barry: I always think about that because I tend to gravitate towards difficult characters -- people who are damaged or broken in some essential way that sets them off from the rest of us. The outcasts and the outsiders. Those are tough people to love, but I'm fascinated by them. And I truly believe that we can learn just as much about the world and life and ourselves from these people as we can from the more typical "guy I want as a boyfriend" or "girl I wish I could be" sorts of characters populating our fictions.

But you nailed it -- you loved his honesty and you had to see how his story ended. It didn't matter whether or not you LIKED him -- you were INTERESTED in him. That's what I was hoping for. I mean, hell, I don't even like Randall all that much, so how could I expect you to! But I do find him intriguing, and I'm hoping that readers will find themselves hate-reading his story, thinking, "This guy is such a jerk!" while simultaneously thinking, "I can't get enough!"

Maria: Randall thinks about sex a lot. Is this typical for a 35 year old male?

Barry: I can't speak for all 35 year old males, but I think in Randall's case, his obsession with sex is really a cover for his feeling that he's been left out somehow. He doesn't just crave more sex -- he craves more of EVERYTHING. His primal sin is gluttony, really. People who've read the book focus on the sex, but Randall is equally as obsessed with his Amazon ranking, his smoothie choices, his apartment, his Twitter followers, his number of signings, his number of books published, his workout sessions… Randall wants MORE, and sex turns out to be something he can get a lot of, so he really zeroes in on it. But it's not just sex. Not really. People just zoom in on that because, well, it's sex!

Maria: What's next? What are you working on now?

Barry: I am wrapping up my I HUNT KILLERS trilogy as well as starting on a very cool middle-grade project -- the polar opposite of UNSOUL'D! I'm also working on a top-secret YA that will hopefully be announced soon. [Tease!]