Another encounter between Valek and Yelena – he thinks she blabbed about the fugitive exercise and is angry.  This shows just how scary Valek can be when he’s mad.  There’s also another clue about their relationship.  I really like when Yelena thinks, “But for a rat to like the cat? That scenario ended only one way. With one dead rat.”  Side note: I’ve a couple readers who have named their pet rats after the characters in my books – I know there’s a rat named Yelena, one named Opal, and another named Kerrick (some may agree that naming a rat Kerrick is appropriate ;).  And here's a picture of Kerrick the Rat: 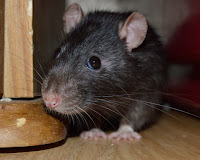 This chapter shows Yelena’s girly side as she lets her hair down and puts colored ribbons in it.  It’s very hard to tell the readers what the main character looks like with first person POV.  I did the rookie thing by using a mirror…sort of, I don’t go into detail about her appearance, but there’s enough to get a sense of what she looks like. There’s been some confusion on Yelena’s skin tone. I imagined her to be darker, more like Latino/Asian coloring than European since she’s from the south. Of course the cover art has her lighter and with a rounder face, but the model is Russian, which matches her name.

When she’s waiting for Rand before going to the fire festival, she observes the others who are also waiting, and I mention their jobs.  I learned about a pantler (Liza) from one of my research books, A Medieval Castle, by Fiona Macdonald and Mark Bergin.  It’s a children’s non-fiction book with lots of colored pictures and just enough information for a writer.  After all, I’m not writing a research paper.  In fact, many of my research books are for kids. Another side note: Poison Study is NOT set in medieval Europe – back then they treated women horrible and their personal hygiene was terrible. Ixia doesn’t have modern tech or electricity, but they have some plumbing, soap, a better knowledge of medicine, and treat women as equals.

Porter and his dogs are there because I love dogs and I had a beautiful yellow Labrador named Hazelnut (Hazel for short) for 16 years, and I swear we had a mental communication thing going on. My husband says it wasn’t magical that she just trained me well. (This is why my next husband will be a dog).  I also worked in a kennel for 4 months when I graduated from university and was searching for a “real” job.  Working with all those dogs was more fun than any “real” job I’ve held (except for writing of course!).  The woman owned over 50 show dogs and hired us to help her care for them (yes, she was very rich). And that experience all went into my book, Storm Watcher.

The chapter ends with a bit of tension when Rand asks Yelena if she would sell information.  I like ending chapters with a bit of a cliffhanger, it keeps my readers reading until late at night so they send me grumpy emails, blaming me for keeping them up all night.  I’m not sorry.  Nope.  Not at all.

Question 11 – Approximately how many copies of Poison Study have been sold world wide?