Yelena’s lessons are very similar to my experience in learning karate.  And the reason Valek loves his knives is because my teacher, Tom Palmer loved his knives, too. Tom has a collection of switchblades that he would show us in class.  He also liked to ambush me in the parking lot.  Learning self-defense in a classroom is very different than being jumped in a parking lot and he wouldn’t let go until I proved my skills.  Those extra lessons has made me very aware of my surroundings.  My one regret is not earning my black belt in Issinryu.  I’d advanced as far as a brown belt, but then I’d gotten married and had kids.

Here's me getting my brown belt from Tom: 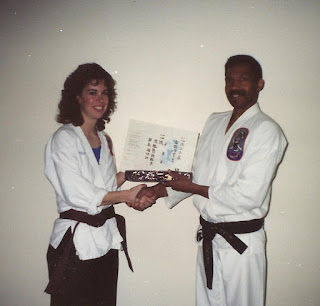 Some of the best emails I’ve received from my readers are the ones from women of all ages who are inspired by my books and signed up for kickboxing classes or karate.  I know one reader who earned her black belt and that’s just lovely to hear.

In this chapter there is a scene with the Commander and Mia, a young student who angered her tutor. When writing a story, every scene that is included must have a purpose and this scene’s purpose is to show the Commander dealing with an incident that he shouldn’t even be bothered with.  As I said before I planned for the Commander to be an antagonist, but once again he decided to be more complex and Yelena was able to witness him being fair and open minded.

Valek returns from his mission and tests Yelena’s response to a strange noise.  When she investigates the rooms upstairs, she finds his carving room. As I said back in chapter 7’s notes, those gray rocks had been thrown into the description to show Valek’s interest in a variety of things.  Imagine my surprise when I learn Valek is an artist and that he carves and polishes those ugly rocks into beautiful black and silver statues.  It’s those moments when I’m writing that are GOLDEN – it’s such a rush when something connects and bam! makes perfect sense. It’s like feeding quarters into a slot machine, one after another and getting nothing by mismatched fruit.  Then all of a sudden the cherries line up and there are lights and a siren and the machine is spitting out a stream of quarters.  Boo Yah, Baby!!

At the end, Yelena asks Valek about the knife with the still-wet blood that has been displayed on his wall of weapons.  This is when readers learn more about the King’s demise and curse.  At this point all I knew was Valek assassinated the King with a knife – I figured out all the details about how he managed it when I was writing Shadow Study 12 years later!

Another one of my favorite lines ends the chapter.  Valek says, “It was a shame to lose my favorite blade, but it does make for a nice trophy.”

Question 17 – In the Glass Series, who gave Opal her switchblade?