I am not a runner.  As a kid, I remember running with ease around the neighborhood, playing tag, baby-in-the-air, and capture the flag.  I remember being fast, making it to first base during a softball game before the throw.  However, those skills did not follow me into adulthood and I gasp for air and feel sick after one lap.  Yelena shares this trait with me.  But unlike me, Yelena is determined to improve.  Her stubborn streak shows in this chapter and so does Nix’s efforts to deter her.

Nix came to mind when I was thinking about General Brazell.  The General would be furious that Yelena wasn’t executed, but since he wants his factory up and running he can’t do anything about it.  Not overtly.  Nix is the logical next step.  Pay someone to harass and bully her.

Maren looks like Ruth, my best friend from High School.  However her name is a combination of mine and my sister, Karen’s.  When we were little, we played around with our names, mashing them together.  Karia and Maren were the results.  I liked the name Maren – back when we were younger no one had that name.  At the time I also liked this boy named Vincent.  Whenever the kids at school were mean, I would imagine changing my name to Maren Vincent and running away.  Isn’t it a cool name?  I actually considered using it as a writing pseudonym, and might still. ;)

The bo staff that Maren uses is a weapon I learned how to wield when studying karate.  Yes, I spelled it wrong in the first three Study books.  I’ve heard the name from my teacher and he provided the weapon in class, but I never saw it written so I wrote “bow staff.”  Yes, I received many emails from readers correcting me and I hope the new editions have the correct spelling. I learned my lesson – never assume – always check! Side note: the other weapon I learned how to wield were sais. ;)

A set of sais: 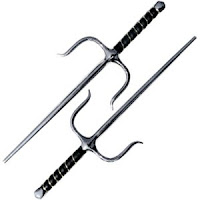 I created Valek’s challenge because, for once, I was thinking ahead and thought I might need during the climax of the novel.  And also if I was going to say he was the best in Ixia, then he better show just how good he is – and look fabulous while doing it, too!

Near the end of the chapter, there are about three paragraphs that advance the story’s time by two months.  I needed Yelena to learn how to fight and it couldn’t be “insta badass” because I want my fight scenes to be as realistic as possible.  However, I didn’t wish to bore my readers with chapters and chapters of her learning how to fight and defend herself…so I used a movie trick—pan the camera around as the flowers wilt, the leaves change into autumn colors, and snow falls (not that far, but you get the picture).

At the end, Margg returns and offers Yelena a piece of cheese…er…money.  The plot thickens ;>

Question 18 – In Touch of Power, how does Avry describe Kerrick's scent?