The day of the training exercise and Yelena heads out into the Snake Forest.  The obvious reason I named it Snake was its serpentine shape – not the most imaginative of names, but when I first drew a map of Ixia all I had for the southern lands was a squiggle to indicate the border.  The name came in handy while writing Night Study and I explain why ships don’t sail between Ixia and Sitia – they can’t cross the Rattles (which is the extension of the Snake Forest into the water in the form of boulders and rip currents that make a rattle sound).

Here's a very rough sketch of Ixia that I used while writing Poison Study: 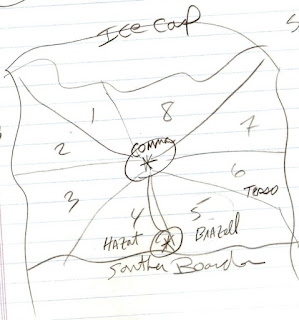 I do drop in a few tidbits about Sitia and explain about the border being closed.  I also thought the Commander would have cleared an area so his border guards can see if anyone is trying to sneak across.  Of course, Valek, his corps, and Yelena have no trouble crossing that border in later books :).

In the chapter prior to this one, I mention Yelena getting ready for the exercise.  However, I never really say what supplies she gathers.  I give hints that she stopped at the blacksmith and there is the scene with Rand and the knife, but otherwise there are no other details.  This is done on purpose so I can “surprise” you later.  In this chapter, Yelena’s intelligence is shown to the reader.  She knows the dogs will be following her scent on the ground, so she takes to the trees, using a grapple and rope. I’ve mentioned her acrobatic training so you’re not surprised she can climb a rope.  Then I added the camouflage of mud and her gluing on leaves to cover her red shirt.  She has thought it through and has enough common sense to figure out what she needs to do to stay hidden.  Plus she has a score to settle with the Commander.  My husband is a bit like that—tell him he can’t do something and he’ll find a way to prove me wrong (or is that all men?).

In this chapter you also meet Ari and Janco for the very first time even though they don’t have names at this point.  Janco is Rough Voice and Ari the “smarter man.”  Did I know these two would be very popular?  That my readers would ask me to write a novel of their own?  No!  At the time, they were partners who were good at sneaking through the woods and also another obstacle for Yelena.  She’s smart, but she focused solely on the dogs and forgot about the other team.  It’s a dose of reality and a lesson learned.

The southern magician makes an appearance at the end of the chapter.  Although the reader isn’t quite sure what’s going on when Yelena bolts through the woods, there are hints that it’s magic. And there’s another mini cliffhanger at the end—my favorite way to end a chapter.

Question 14 - Who gave Yelena her switchblade?