In the beginning of this chapter, there is another hint that Criollo is based on chocolate.  It’s when Yelena says, “Eating it had lifted my spirits and given me a boost of energy. I longed for its sweet taste especially now that my chances for freedom had dwindled.”

Since my husband is a chocolate expert, he has done a great deal of research on chocolate and how it affects people’s moods and health.  In fact, he has proven that dark chocolate is good for your heart.  So eat two Dove™ Dark Promises a day to help your heart!

My husband also argued with Mary-Theresa (my editor at the time) that the “fruit” on the scale on the original cover art should be a cacao pod and not a gourd.  He really wanted it to be accurate. 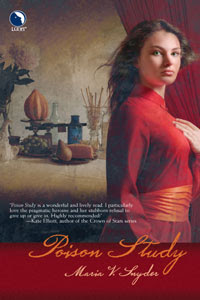 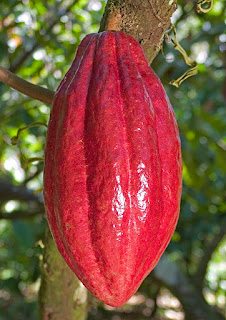 There’s a feast for the Sitian Delegation in this chapter.  In my mind, the Ixians are pale with dark hair and Ixia is drab and gray and cold – like a black and white photo.  Sitia, on the other hand, is full of colors and vibrancy and is warm—its people are darker skinned.

I really like Valek and Yelena’s banter about the fire dancers.  His comment to her during the performance was fun.  He said, “I don’t think I would have made it past the audition, Yelena. I probably would have set my hair on fire by this point.”  His humor is poking through his normally serious demeanor.

The feast doesn’t go well for Yelena as the cognac is spiked with My Love.  Ari is immediately on the move and swoops in to take care of Yelena.  I imagined the effects of My Love are similar to someone who has taken LSD and gone on an “acid trip.”  Since I’ve never taken any illegal drugs, I really can’t say if my description is accurate, but that’s what I was thinking when Valek turns into a black ink spot and the walls run with blood.

Yelena wakes to find Janco sitting by her bedside reading. Janco has his usual colorful commentary and he tells her Ari would have gutted Reyad if the man was alive.  More proof Ari has taken his role as protector seriously (Janco has as well, but he doesn’t show it in the same way). Also this was a good way for them to learn that Reyad did indeed deserve to die—they trusted Yelena, but that was a concern.

Yelena’s hunger sends her to the kitchen and she must be “fake nice” to Rand. It doesn’t last.  Yelena is unable to contain her emotions.  At this point, she isn’t trained as a spy and I think this scene is close to what I’d do in the same situation.  I have a hard time hiding my emotions from my family.  I can’t give anyone the silent treatment for very long.  I blow up and yell, then feel immediately better and I don’t hold a grudge.  I tried to hold a grudge once – one of my volleyball teammates decided to make his own team and took half my players with him all without telling me.  I couldn’t field a team that year (or any since) and I tried to glare at him and ignore him whenever I saw him.  If he noticed, he never gave me any indication. I kept it up for a couple months, but it didn’t last – I just couldn’t sustain the emotion.  Now when I see him, we chat and it’s just like before.

Back to Yelena, she can’t keep her mouth shut and yells at Rand.  During the fight, she almost reveals Valek’s undercover operation on Star.

Of course, this exchange is my favorite:
“You’re in love with him,” Rand cried.
“That’s preposterous,” I shouted.

And then the smell of roasting chocolate fills the kitchen!  It was hard to figure out a way to get those beans into the oven.  That’s how the Aztec/Mayan people discovered what those beans could become – they tossed them into the fire at some point.  They also used the beans as currency.  My husband has gone from chocolate research to the history of chocolate and he figured out how much the beans were worth.  Today it would cost you 150,000 beans to purchase an iPad.

Question 26 – What are Janco and Ari’s horse names?