The Commander’s war room is a beautiful round chamber and the inspiration came from the Catholic church I attended when I was growing up in Philadelphia. Our Lady of Ransom Church is also a round building. The altar is in the middle and three quarters of the circle are filled with pews. The other quarter is behind the altar and for the priests and alter boys. It has beautiful stained glass windows all around and depicting the twelve stations of the cross. When I was in 8th grade, the students of Our Lady of Ransom school next door to the church, performed the “living stations of the cross” and I was one of the weeping women! I remembered I wore purple and I tried hard not to giggle at David, who played Jesus. He only wore a white loincloth. The boys at school always wore their uniforms and I was 13. Oh, come on, you would have giggled the first time, too! :)

General Brazell and Reyad’s ghost make an appearance and I wasn’t sure if the ghost was going to be real or a figment of Yelena’s imagination at this time. There is also a bit of her backstory here – I did that on purpose to tease you and hopefully keep you reading in order to find out what happened with her and why she killed Reyad.

There’s also a bit of world building with Brazell and him needing a permit to build his factory. The reason for that was to show just how restrictive living in Ixia under the Commander’s rule is, and also since my job as an environmental meteorologist involved obtaining air permits for businesses – it was the whole “write what you know” thing.

Rand’s glue was invented when my son, Luke fell down a slope and cut his elbow.  He needed stitches and the poor kid was so scared (I think he was 6 at the time) and I thought why hasn’t the medical profession invented super glue for lacerations. Think of how easy it would be! I’m still waiting for this invention!

Question 6 – How many awards has Poison Study won?

Here's the T-shirt that you can win! 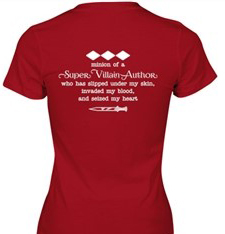 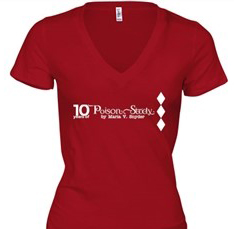